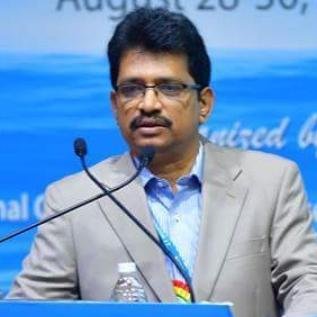 Dr. M. V. Ramana Murthy took charge as Director of CMLRE on 1st January 2020. Dr. Ramana Murthy completed his B.E. in Civil Engineering from Nagarjun University, Andhra Pradesh and obtained M.Tech. and Ph.D. in Ocean Engineering from IIT, Chennai. He has worked as a Senior Engineer at Vishakapatnam Port Trust before joining the Integrated Coastal and Marine Area Management - Project Directorate (ICMAM-PD), Chennai as Scientist in 1999, where he served for 10 years. In 2009, he joined the National Institute of Ocean Technology (NIOT), Chennai as Scientist F and in2013 he became Head of the Ocean Structures & Island Desalination Division at NIOT. In 2016, he was appointed the Director of the National Centre for Coastal Research, Chennai, a position he holds to date.

During his tenure at various institutions of the Ministry of Earth Sciences, i.e. NCCR (formerly ICMAM-PD), NIOT and CMLRE, Dr. Ramana Murthy has made significant contributions, particularly in the field of Ocean Engineering. These include customization of tsunami model for early warning system at INCOIS, beach restoration at Pondicherry and Kadalur Periyakuppam, Tamil Nadu, development of Chennai flood warning system (c-flows), the establishment of desalination plants in 8 of the Lakshadweep islands, construction of sea link between Port Blair and Rutland Island for drinking water supply. He has been instrumental in more than 100 consultancy projects and imparting training to coastal states, research and educational institutes on coastal zone management, shoreline management, and coastal vulnerability mapping. He was awarded the National Geo-Science Award by the Ministry of Mines in 2010 for Outstanding contribution in the field of Disaster Management and was conferred the Ministry of Earth Sciences Award in 2006 for outstanding contribution in the field of Coastal Processes Modelling.

Dr. Ramana Murthy is a National Expert on Climate Resilient Coastal Protection and Management Project, CWC and has served on many national committees, including the Research Advisory Committees of CMLRE and NCESS and Governing Council of NIOT. He is a member of the National Coastal Zone Management Authority, MoEF&CC (NCZMA), presently officiating on behalf of MoES. He has been a member of several other Expert Appraisal committees on CRZ and EIA constituted by the MoEF&CC.